People Are Fly By Wire 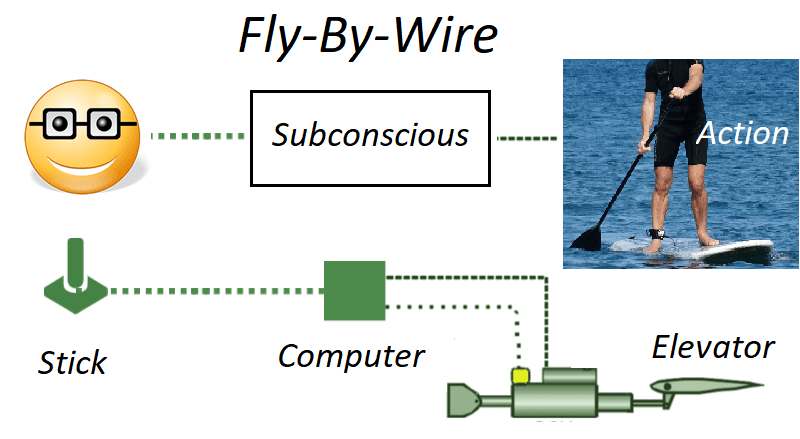 Why don’t we do what we say we want to do?

For example: “I want to lose weight, but then I didn’t”?

It’s because what you think consciously is not connected directly to what you do. Your steering wheel is not mechanically connected to your wheels. It’s what engineers call ‘fly-by-wire’. In an airplane, there’s something in between the joystick in the cockpit and the control surfaces. That ‘something’ interprets what you are asking, checks against built in programs that it is OK to do what you ask and only then follows the command.

We believe that when we say we’ll do something, we’ll do it. Actually, we know it is not quite as simple as this. What we don’t understand is why that ‘middle man’ stops us.

In the case of an airplane, the computer that stands between the joystick and the parts that move does some calculations to make the job easier and safer. If you move the stick to the left, in a conventional plane the plane would turn and dive slightly. With fly-by-wire, the computer adds some ‘up’ to the control surfaces to hold the plane at the same height. That makes it easier for the pilot. It all sounds good. But if you really want to fly outside normal limits, that computer is going to get in the way of your doing it and, in a way, thwart your efforts.

So it is with people. Under normal circumstances those programs (let’s call them ‘paradigms’) make life semi-automatic and keep you safe. When you want to make an unusual change, the paradigm puts up a resistance. Then, you don’t do what you said you were going to do.

So to make the change, you need to create a new paradigm and that takes more than just wishing it.