When The Tourists Are Gone 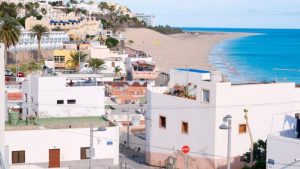 Morro Jable with no tourists

Translated from the article by CATALINA GARCÍA for Canarias7

In silence, with the sea a witness to the east and the white dunes of Jandía pushing to the west, the nearly 7,000 residents of Morro Jable await the return of tourists. This town in the municipality of Pájara grew supported by twenty hotels and apartment complexes in nearby Solana-Matorral, today deserted by customers.

As a coastal area, the feeling of confinement is almost double due to the presence of the timeless beach, now out of bounds.The inactivity is so great that even the sand that gives its name to the town threatens to invade the maritime avenue where the only human presence this afternoon is the boys, dressed in orange jumpsuits, who disinfect the promenade and its surroundings. In the distance, someone walks with two grocery bags on each side, a stark outline against the backdrop of 14 kilometers of white sand beach in Jandía.

Morro Jable’s silence is broken by the home water distributors and the sound of televisions through windows and balconies. Behind a protective visor and with gloves, Esidia Cuenta (Barranquilla, Colombia, 1962) works at the Adela minimarket in one of those streets that go to the sea. “I tried to put on a mask to protect myself from infection, but I was sweating, my glasses were fogging up and I only managed to touch my face once and another time while attending to clients. Clients are many fewer in these times of coronavirus. Only half are coming now and they do it for bread, soft drinks, some food and little else.”
It is not the first store that she has run. When she arrived in the island, she started working at the Daisy, on the same street. This is what she did in her native Barranquilla and what he continued to do when she settled in Fuerteventura nine years ago. “In all these years, I have not seen a slump like the one now because of the state of alarm: nobody on the streets, nobody in the shops. Her clients are sure that, when the confinement is lifted, they will leave Morro Jable. Everyone sees the return of tourists to be a long time away. So it will be a long time before the town recovers its economic pulse. “This is a very big drop.”

At the top of the street, suddenly people accumulate forming a kind of line. “Ah, it’s nothing,” explains Esidia, “it’s the queue at the only pharmacy in Morro Jable, that’s why you can see so many people. In the tourist area of Solana-Matorral, we have another one, but we don’t live there”. The rest of the tourist town remains silent, including the port area, where the only daily ferry boat has long departed for Las Palmas de Gran Canaria. On a rooftop, someone is moving: it is a married couple who exercise within their few square meters.

“First? Yes, I am the first taxi in line”. Todor Dragiev Ihiev does not understand Spanish very well, but he figures out his euros and fares like no one else. This Bulgarian taxi driver updates the figures: “There are 77 taxi licenses, but each day we can only work fifteen taxis. Once, two days; and again, three days. With this scenario, revenues have dropped from almost 200 euros a day before Covid-19 to 30 euros now. With this income, life is not sustained. Half of the profits: for the boss. The rest go to pay for the house, the license for the car, the money that I have to send to my daughter who is in Bulgaria and to eat. You have to pay and I don’t know where to get the money for everything.” Todor ends with a smile and the message of hope that is repeated in every citizen. “We only have ourselves and we are healthy, we have not become sick.” The expected afternoon miracle occurs and someone takes a taxi, his own.

At a bus stop in the ravine of El Siervo, something finally moves: it’s the goats.

The One Thing That Will Make You & Your Improvement Projects Look Good>>> Yes! I want it!